With much excitement Marisa and I were up bright and early Saturday morning to catch an 8 o’clock bus to Jamsil, where we could then take the subway to Gangnam, and finally catch our tour bus for the three hour trip to the beach at Boryeoung and the infamous Mud Festival. When we finally arrived in the city the weather was gray but hot and humid, and after much disorganization on the part of the company that we booked with, Marisa, Cassy, Wang, Luke and I eventually found our little pension room and got settled in. We made a quick change and ambled straight to the ocean for some good ‘ol fashioned frolicking. I was not disappointed by the various mud-themed activities: painting stations full of mud and paintbrushes, a huge slide, a bouncy pit, a mud fountain, mud wrestling (it was in this area that I saw a girl’s very private parts whilst she wrestled another girl, but I won’t write about that little incident) and all on a beautiful beach on the west coast of Korea. It wasn’t until about 3 or 4 pm when the weather took a turn and the rains came down. This wasn’t so bad  except for that it is monsoon season in Korea, and some pretty high winds accompanied the rain. For a little while the ocean/beach area was evacuated, so we ventured back to the pension to change and head out to grab some dinner. The rain never really quit, but much fun was had all through the night. Fireworks were lit off over the beach around 11, our whole large Pyeongnae crew took over a local bar called the “California”, Jon, Marisa and I rocked the nuraebang until 5 am, and Jon and I (the final two standing!) went for a morning swim in the incredibly cold water right after-an eventful day and night for sure. Unfortunately, I woke up Sunday with a high fever and feeling absolutely horrible. Retribution for wild times! It’s Monday night now and I’m still quite ill, feverish and chilled, with a swollen throat and aches all over. I’m not sure it can all be chalked up to beverages drank over the weekend, but instead to the absurb amount of time spent in the pouring rain and/or wet clothes. Let me tell you, today was a day that I longed for the right to take my sick leave at work-I believe you all remember my post-wisdom tooth removal issues, yes? So no sick day for me.  I just hope that all is well for Thursday’s school field trip with the kiddies to Ocean World, a waterpark not too far away. As for now, I’m all about sleep and liquids-food isn’t staying down well (I did manage to keep in a bit of soup and half a sandwich today though, which is better than the nothing that I mangaged to not throw up yesterday). 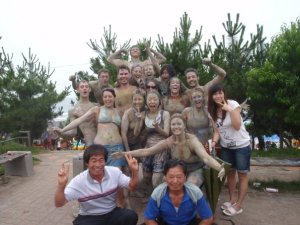 being a touristlife in Korea