It was so nice to be able to roll my goodbye party in with a holiday celebration! Keeping the focus on merry vibes rather than goodbye vibes kept me from crying all over the place. We had a candy cane cocktail, boozy hot chocolate, and myriad other beverages, along with some delicious nibbles. It all came together really well. I kept the tv running every Christmas movie available on netflix, and had some good vinyl(in my humble opinion) on rotation. There was an amusing gift exchange, which left me with a corn-decorated coffee mug and a traffic cone that may or may not have been stolen from OSU property. Score.  Of course, lots of pictures were taken. Sorry I’m in so many of them, but I guess that’s not a huge surprise! 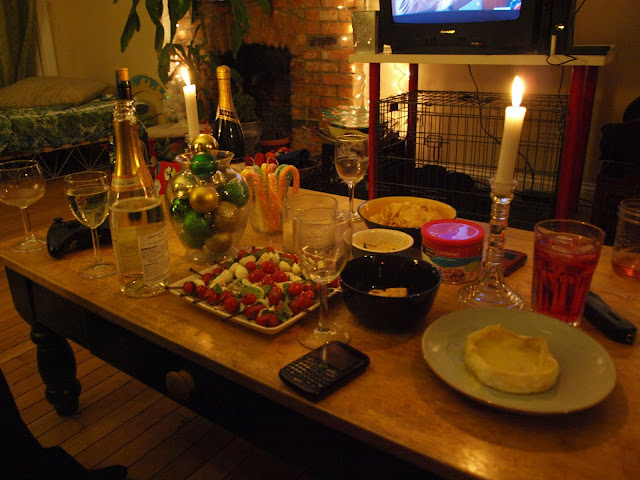 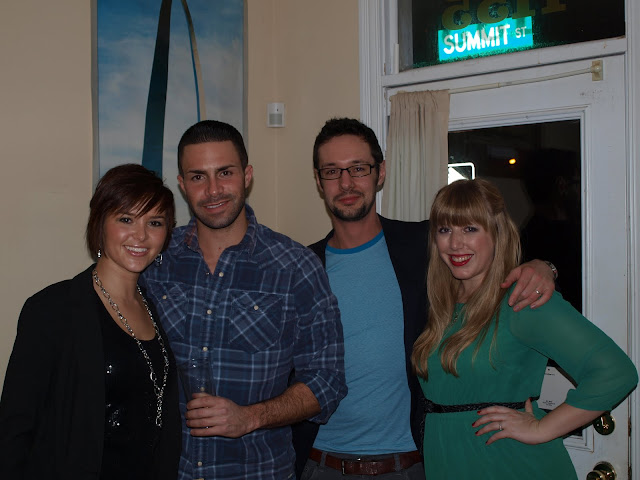 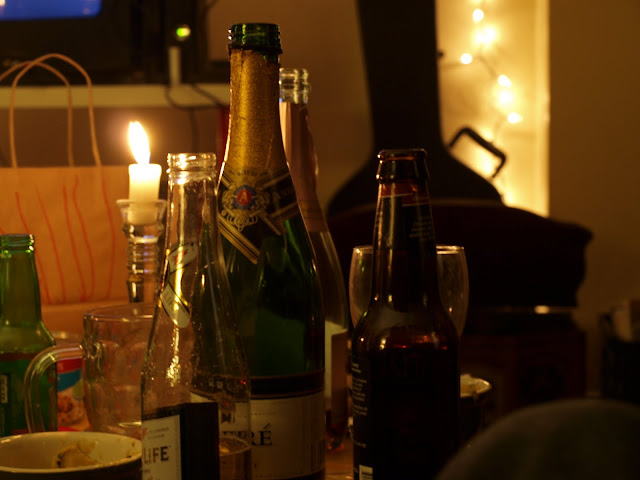 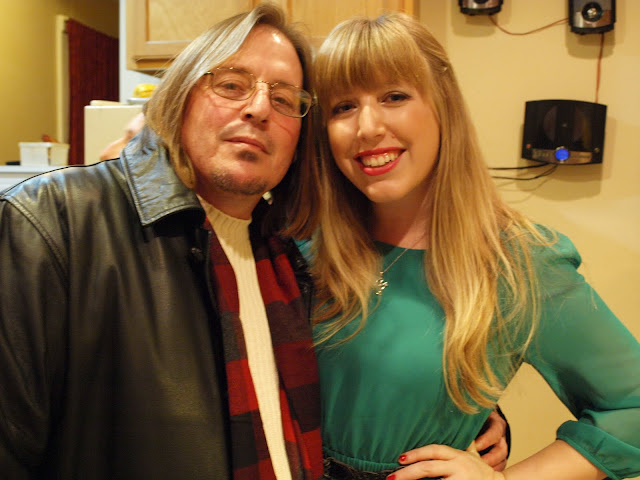 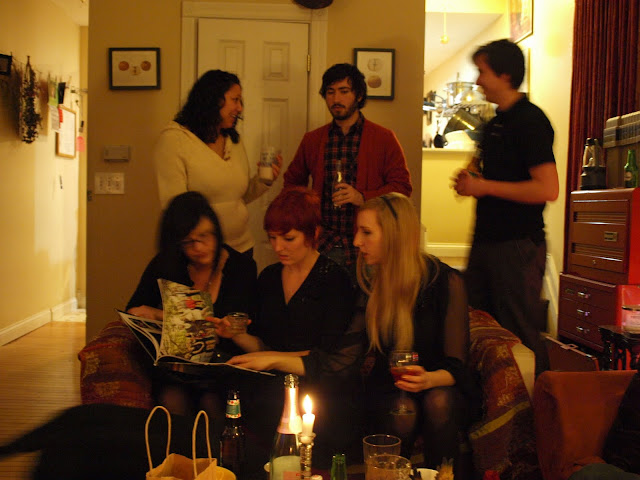 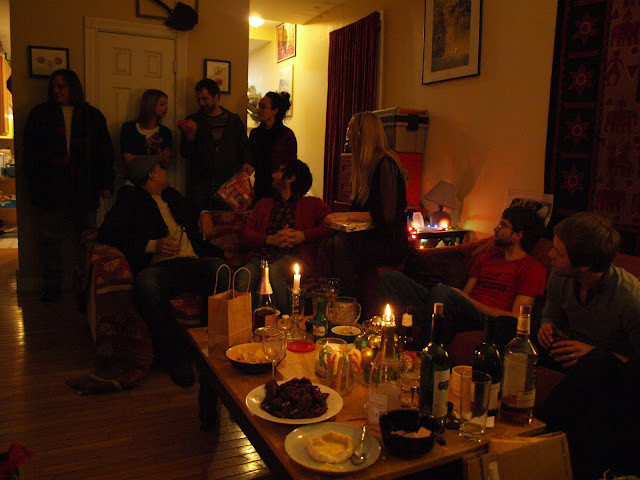 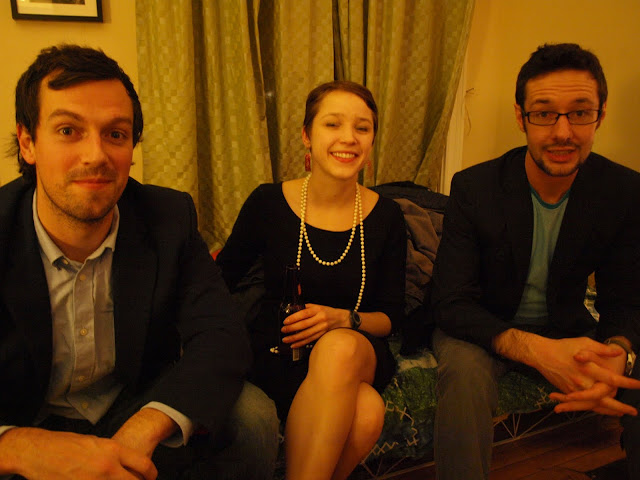 Oh and my (possibly drunk) father requested a picture of everyone there, which resulted in this: 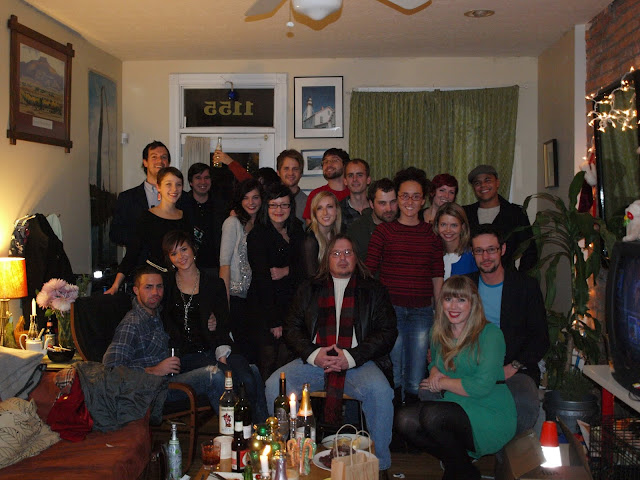 Fun, right? So in sum, it was a great party, and a lovely way to say goodbye to all my favorites.

On a more serious note, last night Jon and I spent some time in the emergency room (A&E, as I’ve learned it’s called in the UK). We were out to dinner with some old friends we met in Korea when Jon looked at me, said “I feel strange” then proceeded to immediately pass out. He came to, then a minute later his eyes rolled back in his head and he did the same thing, except this time he also started choking and proceeded to throw up. Again, he came to (although he was an awful green color), and although we’d called an ambulance, he said all was well, so we told them not to come. However, when he once again lost consciousness about 20 minutes later, enough was enough, and off to the hospital we went. They took blood and did an EKG, but there wasn’t much of a result. Basically they chalked it up to his heart stopping sending blood to his brain, causing his brain to go into survival mode and shut off everything else. This also could be a form of food poisoning or something, although that seems pretty damn unique for food poisoning, don’t you think? I do. So we came home and Jon has been told to stay in bed for a couple of days. Today he seems to be doing a bit better, although still feeble. This wasn’t how I expected my first couple of days to go! I’m thankful though, that he’s doing alright, as this was one of the most terrifying things that has happened to me. Watching my husband wilt before my eyes, eyes rolled back and skin pale, was just…horrible. So horrible. And I felt completely powerless. On a side note, the NHS (national health service) really is wonderful, despite what anyone says, and all I could think while we were at the hospital was that the ambulance and all the people taking care of him-the services involved-would have cost us thousands of dollars in the US, with our combined lack of insurance. Here, the experience, while terrible in itself, isn’t going to put us in debt. Thank goodness. Here’s to hoping we ring in the new year on a better note, and in good health!