Another mostly rainy weekend with some peeks of sunshine thrown in. Now Monday…is just plain icky out there. Super windy, rainy, and just gross. Nooo!

Our weekend was chill and superbly pleasant, for the most part. We stayed in Friday night to watch zombie movies and drink vodka drinks on the couch (middle pictures up top-sad zombie faces). Saturday we were kept indoors by rain for a little bit, but ran out to meet Colin and do some wandering in the Laines the second the sun came out (still not buying anything and pinching those pennies…sigh. but looking is fun anyway!). We even managed to take part in the end of Record Store Day festivities by drinking free beers at Resident and watching Colin be a raffle winner. Lucky guy! Next year, employed Ashley is going to be all up in there, buying all the vinyl.

Sunday wasn’t as fun. We spent a big part of our day protesting a “March for England” (aka racist thugs parading through town under the guise of loving England). Jon wrote about it here. It was a pretty amazing showing of protesters-about 1500 or more?-yelling at the ~200 or so English Defense League marchers(code for racist racists-sort of like the English version of the tea party but older, I think, and with less actual politics. Or like those assholes that protest at military funerals and say it’s the gays’ faults. They are not cool, is the point I’m making here). Anyway, the protest was going well. The police had their work cut out for them and the atmosphere was volatile and hostile, to say the least, but they were keeping the parade moving along when a bunch of anti-March for England protesters up and got in the street right in front of us, in front of the mounted police (!) and then were surprised when the police rushed them with horses and batons when they refused to get out of the way (as an angry mob of racists built up behind them). Now there are reports online shouting that the police were on the side of the MFE  or were violent to protesters and it’s very disappointing. I’ve been in plenty of protests and marches, and the way that this (small!) group of protesters acted yesterday was, plainly, idiotic. Everyone around us (including Jon and I) were yelling at them to get out of the way and stop touching the poor horses! It was ridiculous.  The protesters would have started a violent melee if the police hadn’t moved them out of the way, and as no one was actually hurt (all the better work of the police!) well…I’m just glad it’s over. And the idea that the police should have just rolled over the rights of the racists to march down the street and put them on a train out of Brighton(it’s a free country, remember) just bummed me out. You KNOW that people would pitch a fit if police stopped a march/parade that was for something less dramatic/problematic-for example, Gay Pride or something. Freedom of speech kids, it’s a real thing in the UK too, even if it has some slightly different rules. 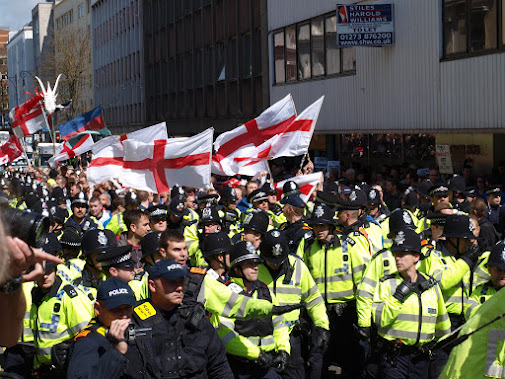 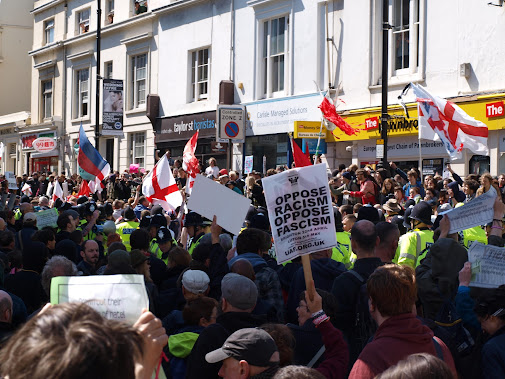 Anyway-it was a big weekend! Throw in some fighting on facebook about vaccinations for little ones, and I gotta say I’m pretty happy for a new week to be here! This is my last week of unemployment too-hurrah. Next Monday I start my new job. I’m really looking forward to it. And on Wednesday I’m heading up north for a real live vacation trip away. It’s exciting stuff over here folks-things are happening.