The train ride from London Victoria to Paris’ Gare du Nord is only 2 and a half hours long, so when we woke up on Wednesday morning to beautiful blue skies in Brighton-a far cry from the past few days of dreary rain-I was hoping the weather would be equally beautiful in Paris. And the ride was lovely, all blue skies and fluffy clouds. That is, up until we were 20 minutes outside of Paris, at which point the rain began coming down. Sigh….no escaping the lackluster weather for us! It didn’t matter though. It was still warmer in Paris than Brighton and c’mon! We were on vacation! In Paris! And after finding our hotel on the Place de la Republique, we quickly left again to find Lindsey and her group of students at the Sacre-Coeur (our whole reason for scheduling this holiday in the first place). We climbed to the top of the hill that the old church sits atop of, avoiding all the lecherous tourist-trapping dudes on our way and checked out the view of the city while keeping an eye out for my favorite blonde lady friend. My little heart skipped a beat when I saw her running towards me on the steps-there was definite squealing involved on my side of things while hugging. Reunion are the best thing.

This was the first time I’d seen anyone from home since I officially moved to the UK 6 months ago, but it immediately seemed like a completely normal occurence to stroll around Paris with Lindsey and Jon. That’s how it goes though, right? We made our way from the Sacre-Coeur to a side street and a tiny, tiny bar that Lindsey’s friend used to go to when she lived in Paris. It was ridiculous-the bartender made the most complex drinks ever, mixing an infinite number of far-flung ingredients, chilling them with dry ice and garnishing them with tiny treats and chocolates, each made with the utmost care and precision. Jon’s mojito even had a hint of wasabi in it! Lindsey and I shared some freshly made pina-colada ice cream with the barmaid, at her behest. It was delicious and a great first night in the city.

After that fancy drink we headed back to pick up Lindsey’s students at the Sacre-Coeur, attempted to take some blurry pictures, and basically called it a night. No shame in that game! Jon and I took a long, quiet walk back to our arrondisement and our hotel, looking for and somehow missing the Moulin Rouge, soaking in the night. Jon was already in love with the city, it being his first ever trip (oh, the English…). Thank goodness! I can’t have my Parisian love affair be a thing only for me and not my partner. That would suck.

Our hotel was lovely and quiet, with weirdly plush walls, windows that opened onto the street outside, and a free croissant-and-nutella heavy breakfast every morning. It was all made better due to the fact that our air miles had paid for it-believe me, we were grateful.

Thursday morning was the only full day that we had to spend with Lindsey, due to her groups’ departure from zee gay Paree on an early Friday morning flight. However, it was a really big day-one of those that seems to last forever because it’s so chock full. We met her group at the Trocadero on Thursday morning, in view of the Eiffel Tower. The sun had come out that day, and though I was bummed to see my plans for a picnic with my dude under la Tour Eiffel dashed due to a crapload of construction around the area, and more construction to the Tower itself, it wasn’t much of a big deal. More time for exploring rather than waiting in line to go up!

okay, and one more with the dude.

Do you know what it’s like to see a dear friend do their job? It’s so interesting and surreal. Seeing Lindsey interact with her students and seeing how they adore and respect her…it was cool. I felt so proud and happy for her. That girl-she’s good at her profession.

After sending L’s students on their very fashionable way, we headed to the Marais, the Jewish neighborhood in Paris. We had crazy good falafel at a place with a million boasting photos of Lenny Kravitz on the walls (apparently he goes there every time he’s in town, and they are incredibly proud of this fact) then did some vintage shopping and general wandering (there’s a theme here….eat, look at things/shop, walk, eat, look at things, repeat).

Post-Marais and in the late afternoon, we were due to meet Lindsey’s group again at my number one favorite place in the world, Notre Dame. It is one of those places that quiets my heart and provokes a visceral reaction in me. I love it. The first time I went there I cried. This year it’s 850 years old. Can you imagine?

And there she is… 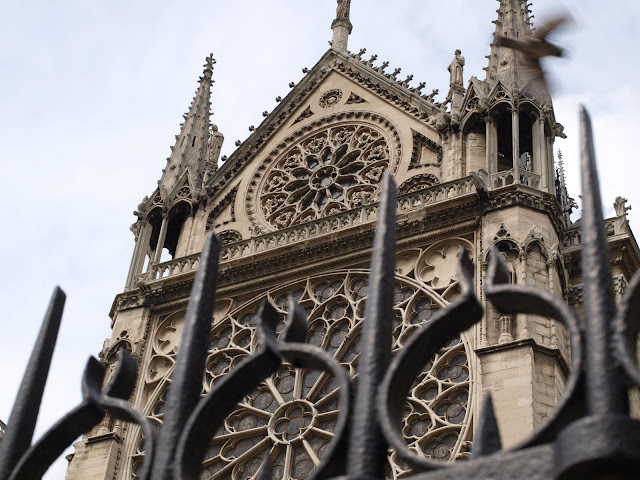 I just love it. Every inch of stone in that cathedral tells a story.

So after that we found a nearby place to chat and split a bottle of wine. It was nice to just chill and talk with my friend, something I have dearly missed.

On a side note, it was nice to have Lindsey take some actual pictures of Jon and I looking happy, instead of the general camera phone pictures that have made up our photographic existence in the recent past. Thanks Linz, you’re the best!