Friday morning Monsieur Norris and I were all by our lonesome, and with not-superb weather predicted, we decided to have a museum day. We wanted to do the Louvre, then have a long French-style lunch (read: booze and and baguettes at a tiny round table on the street whilst people watching), then cross the Seine and go to the Musee d’Orsay. Solid plan!

I love the Louvre. I don’t care how popular and crowded it is. It’s wonderful in every possible way. My favorite sections are the sculpture on the 1st and ground floors and the Renaissance paintings on the second floor, in the Richelieu wing. Not the Dutch or Flemish painters though-crazy boring and religious and so, so dark (in my completely uneducated opinion, that is, I am no art critic). Also, Napoleon’s recreated apartments are beyond decadent and amazing. So worth the visit, all on their own.

Napoleon’s chambers. We saw bunny slippers. Made of bunnies. WHAT. Napoleon, you crazy.

We also went into the worst room in the whole place, with the Mona Lisa and its ensuing crazy crowd. The painting has to be in a room almost by itself, on a wall in the middle, behind plate glass. And still, people crowd around to take pictures of it/in front of it. Jon took this picture to illustrate that silliness. La Jaconde, indeed. You can’t see anything!

By this time we’d been in the museum for many hours and were ready to get a move on. Outdoors, picture, baguette, wine, yes, yes yes.

Let me just say, I would prefer a brie baguette to an orange sauccison any day. Truth. That red wine was great though. We sat for a few hours, sipping our wine and enjoying the people watching. And dog watching. Because there are a ton of great dogs in Paris. And everywhere in the world. Dogs are the best.

The Musee d’Orsay is another of my favorite museums. It boasts some amazing architecture, as it used to be a train station and has only been a museum since the 1970s. It holds impressionist and post-impressionist works-Toulouse-Lautrec, Van Gogh, Cezanne, Manet, Monet, and on and on. Strangely enough, and in contrast to the Louvre, they forbid photos inside. Which is nice, because even though I’d rather be focusing on looking around, I can’t help but take pictures if I’m allowed, because I’m dumb. So this is a nice way of fixing that problem. Thanks Musee d’Orsay!

The fabulous giant clock on the top floor, leftover from its days as a station.

So by the time we finished at d’Orsay, we’d been on our feet for what seemed like infinite hours. I was maybe dying a little inside. And no lie, at some point I’d picked up a crazy swollen left foot from two and a half days of walking in flats (I will never go the tourist in tennis shoes route, in any country, ever. Mark my words!) It was time to go back to the hotel. We sat in the Tuileries Gardens for a few minutes for a chill chat and that was just… nice. 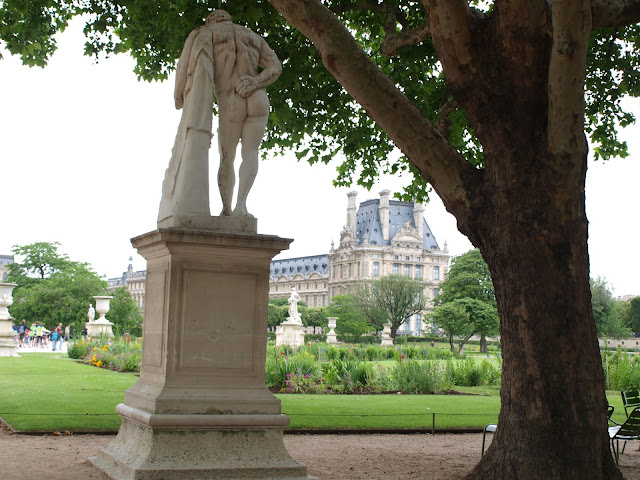 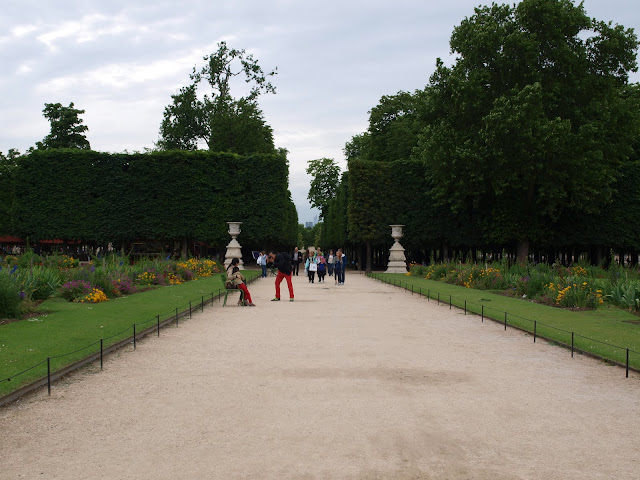 I could hang out in the Tuileries every day. Can you imagine going for a run and having this be your backdrop? Lucky ducks.

Dinner was not that impressive, in my opinion. We ended up at an Alsacian place, which meant it was a sort of French/German fusion. Not my favorite-too heavy. Also, fusion is probably not the best word for food from a region of the world that had border issues between the countries for decades, therefore causing the melding of cuisines. Anyway. I loved my starter, which was a yummy pastry with seasonal veggies. Jon had duck pate, which he loves, always. And the mains were forgettable. But dessert! Oh, dessert. Creme brulee for me, puff pastry with whipped cream for Jon. Delicious.

Please notice the terribly ugly wine glasses. What is going on there?

Alright! Only one more post about Paris left. Which could be good for anyone getting tired of this trip down recent-holiday lane for me:) Rodin, La Seine at night,  my favorite cult bookstore in Paris, and the Pere-Lachaise cemetery.