Really. Go read this article, and think about why we are still having these same discussions, with such little change in content, nearly 100 years later regarding the rights and abilities of women in America. Think about this when you go to the polls on Tuesday.

The messages you find on anti-suffrage postcards from the 1910s are not dissimilar from what you might hear from Rush Limbaugh or Bill O’Reilly today in the 2010s. Suffragettes were drawn as conniving coquettes, ugly, mean spinsters or, worse, ugly, mean wives who left their families helpless as they attended town-hall meetings. Scenes of women politicians showed them hatching diabolical plots to undermine and emasculate men further. In England, particularly offensive cards took sadomasochistic delight in the force-feeding, while sympathetic cards depicted women as beat-up cats, referring to the Cat and Mouse Act.

“Even when you hear some of the contemporary discourse about the conservative women who go into politics, when you listen to the Michele Bachmanns or the Sarah Palins, there are strong connections back to the arguments and ideologies of the Remonstrants. Should women with school-age children work? Who is the primary giver in the home? Should men co-parent? Yeah, we’re having the same debates.”

Now, in 2012, it’s possible the women’s vote could effect the outcome the U.S. presidential election. You would think we’d also have moved beyond gender stereotypes depicted in these postcards, but they’re still strong. In fact, in the past year, a lot of breathless articles have been passed around declaring “the end of men.” American women, it seems, have gone and reduced the male population to sniveling man-children, just by making small advances in academics and business. 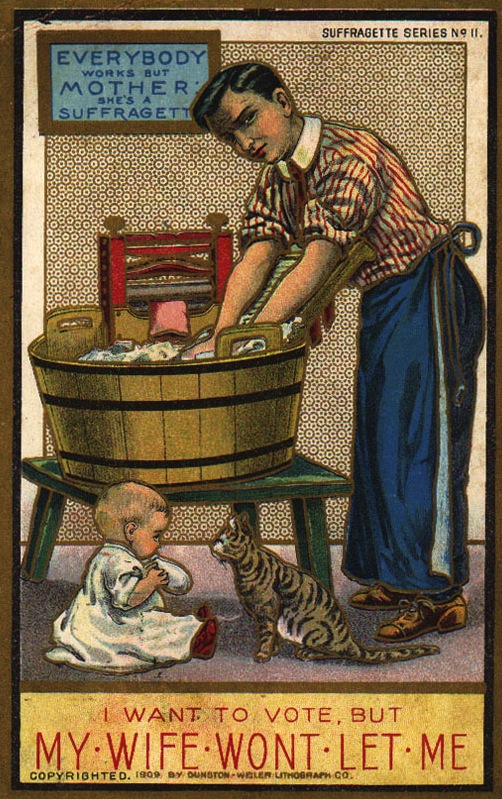 I, for one, am tired of fighting this fight.