Waking up at the same time on a Saturday as you do during the work week is always pretty terrible, but on this particular Saturday Jon and I were up and at ’em early enough to grab the dog, walk to the train station and head down to Brighton. My test was scheduled for 9:30, with directions to be at the center by 9:15 at the latest. We spent the 20 minute train ride doing some last minute cramming for the test, Jon asking me questions and me shooting back (mostly correct) answers. Bruce didn’t help much, that little furball. 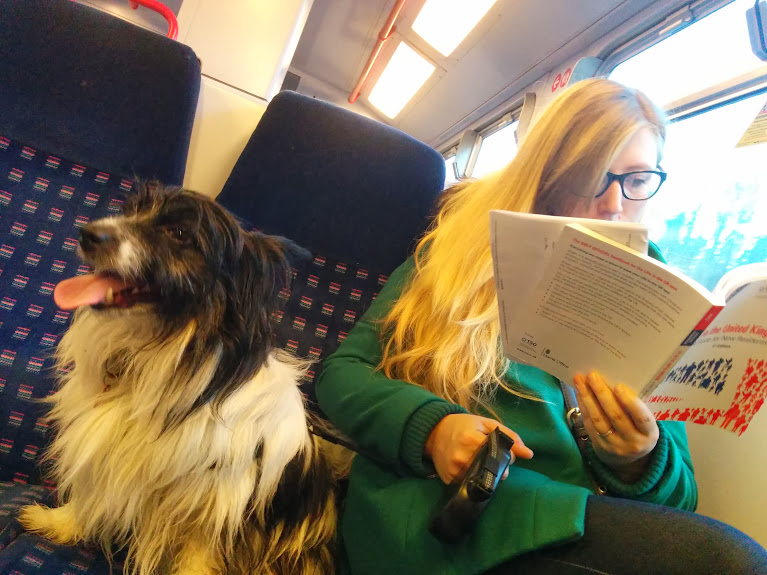 The test isn’t actually very big at all. Twenty four questions,  45 minutes, and you must get 75% correct to pass. If you fail you have to take the test again. You must have a “pass” letter to send in with your application for citizenship or settlement, and I am at the point where I am applying for settlement/indefinite right to remain, because my spousal visa will expire in March. It’s not the same as citizenship-no UK passport for me!-but it does mean I will have the right to live in the country and go in and out as a please for the indefinite future. Also, if I can’t get this specific visa I am pretty sure I just have to leave? So. It’s pretty important.

There is an official study book to read, and another official book of practice questions and answers (thanks UK government, please take more of my money on top of the £50 test fee and £1050 visa application fee!). Of course, I purchased both of these things, and read every word. It’s hard to learn everything ever that the government considers important and worthy of knowing when the country itself is centuries older than the one you came from originally. There was plenty of obvious stuff included, things one would pick up over 2 years of living in a place (D-day refers to what event in British history?), but also there was stuff that I am sure, without a doubt, that no English person on the street would know (What was isambard Kingdom Brunel famous for designing and building?). Sort of like taking a history exam in 8th grade. You memorize and forget it, and it makes fun trivia for trivia night!

The testing center was exactly what you would picture. A small, lifeless room with lots of tables and old computers. There were about 20 of us there to take the test. I was the only American. As Jon and I walked up to the building we knew we were in the right place, with all the foreign looking folk milling around nervously, most flipping through their well-thumbed copy of the test prep book. At 9:15 they opened the door, and while Jon was giving me a good luck kiss, I felt scared for the first time, and my stomach dropped.

Once inside, they sat us at computers spaced two people apart. Three civil servants were tasked with checking us in and getting us organized. They were all really nice, which I was and am so grateful for-it’s easy to be grumpy having to work with a bunch of foreigners taking a test on a Saturday morning, but these three were wonderful. The checking in process was extensive, and meant that at some point each of the three English people spoke with everyone in the room, looking at our passports and proof of current residence. I had a small bump when my sign-in signature on the register didn’t match the (ten year old!) one in my passport. They asked me if I had any other documents that contained my signature and while I was freaking out a little bit they suggested maybe a bank card?, which did have the same line of scribbles and whew, everything was okay.

Finally, forty-five minutes later, just past 10 am, we were given one final spiel and then individually “clicked through” to take the test. My first question completely stumped me. Something about William Caxton? Deep breath, on to the next one…..and I didn’t 100% know it either. Oh shit. This is hard. What if I actually fail? I actually started to contemplate what would happen if I failed the stupid thing. Thankfully, besides those first two, there were only a couple of others that I wasn’t sure on, and everything else I was pretty confident about.

Less than ten minutes later, I was finished. Twenty four questions doesn’t exactly take a long time, now does it? I was sent into a little room, and told that I passed, and I could finally breathe again. I walked outside with my pass letter in a little envelope, shaking and smiling and just happy to be finished. 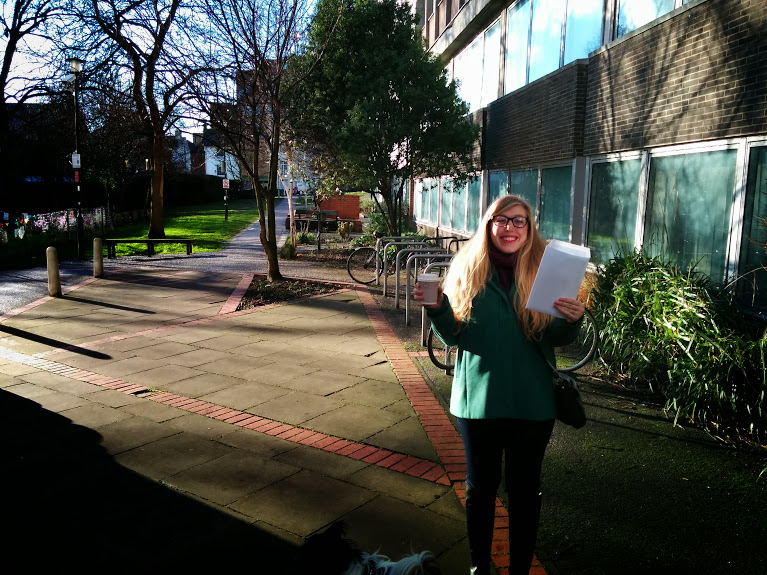 I can’t help but think about all the other people who were taking the test with me that day. Almost none of them were from countries where English is the first language, and I can’t really imagine the amount of terror they must have felt-mine to the tenth, I’m sure. The guy sat catty-corner to me was the most adorable older man, and I heard him say he was from Algeria. He obviously didn’t understand a lot of what people were saying-right after the head civil servant gave his little speech and said we were no longer allowed to go out to get water or use the restroom, he stood up and started to walk across the room to the restroom! We exchanged a few smiles, and I know he was scared. I really hope he passed.

So now it’s on to the next part. Paying a huge fee (equal to the huge fee I paid just a short two years ago), filling out my 40 page application, and getting biometrics done. Hopefully this will all be done sooner rather than later, since we have some travels coming up soon and I’ll need my passport in order to book travel for those things. This is just the beginning, but I’m so glad it’s over! Being an immigrant is hard, dudes.

3 thoughts on “the day I passed my UK residency test”