Tonight I took my after work walk with Bruce, and the evening was so goddamn gorgeous that I nearly closed my eyes and did walking meditation into the sunshine along the river. Unfortunately, I have nowhere near the coordination for walking meditation, so I did mostly regular walking while Bruce to’d and fro’d along the river, breathing deeply and being thankful not to be on a computer, and also making sure I didn’t fall into the muddy river below. High tide and all that.

One of my favorite people, Evie, does a weekly newsletter thing, and I’m thinking of doing it and jumping right on that bandwagon. Mostly because I have a lot of feelings about putting things on the internet under my real name, and feel awkward about whatever I write going directly into the inboxes of my in-laws and parents. Silly me and my oversharing on the internet. It’s just so weird these days! I know I’ve waxed rhapsodic about xanga and all that before,but it is indeed strange how much easier it used to be to be honest and open on this weird space. Also, newsletters are kinda romantic. I should just start over, anonymously.

On Sunday I got the last piece of the puzzle that has made my life a lot easier. My residence permit arrived in the mail, and that coupled with my passport, means I’m actually allowed to leave the country again-something I haven’t been able to do for six months. Better yet, I could leave England for months at a time (up to two years!) without coming back, and I’d still have indefinite right to remain in the country. This is a big deal, and makes things so much easier. The next step is citizenship, which I can apply for in ten years or so, and which I’m not positive I’ll want anyway. This is good enough. And you can bet your ass that Jon and I immediately booked a holiday. We’ll be on the south coast of Spain in t-minus 25 days and I cannot wait! 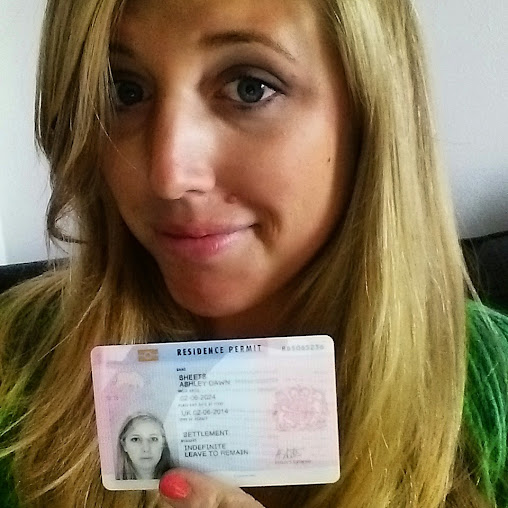 Other things that have happened lately: Bruce has gotten unbearably furry. Turns out it’s really really hard to book an appointment at a dog groomer once you’re full on into into a very summery English summer. I feel bad for the little man, but thankfully we found a place that could get him in next Monday after being pushed out of multiple places nearby. This is my life-worrying about how hot my small dog (the true love of my life) is. (Don’t worry, Bruce is the love of Jon’s life too, we’re totally even on this). 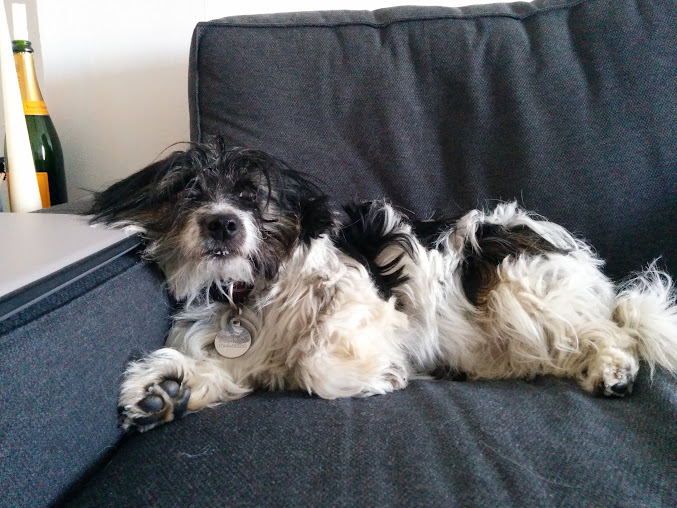 My job has been going well. Super well. So wonderful that I feel stupid talking about it because I never assumed that in this life I would ever have a job that I love as much as my job. So I won’t talk about it because it nearly seems like bragging and I would never ever do that, since no one magically finds themselves in a good job due to only their own hard work. This is purely luck. But here’s a view when I spend the day working from my boss’ gorgeous house in the country (three screaming children underfoot who are all under 4, barefoot myself, hangout out in the attic, it’s very dreamy for me). 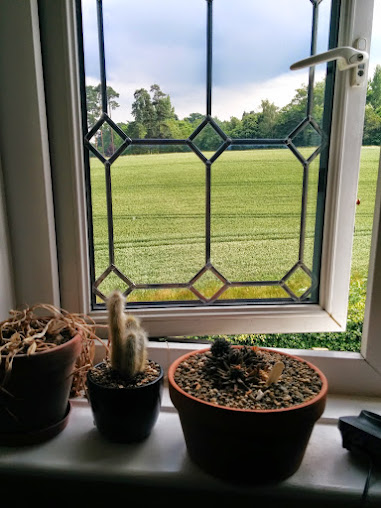 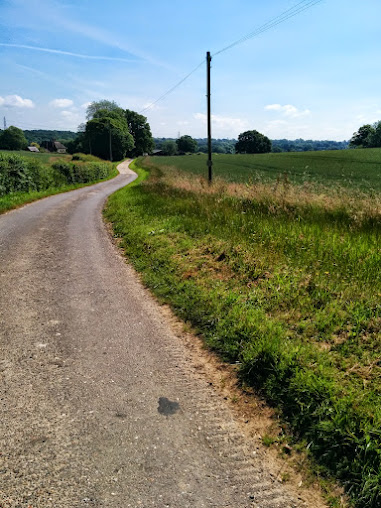 Last weekend we went to our friends’ engagement party, and it was so fun and full of love that I wanted to burst. Everyone dressed up and got drunk and felt happy, and I love that more than I love pretty much anything else. 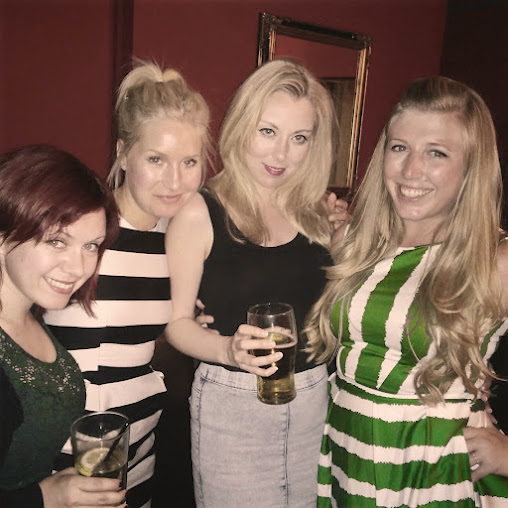 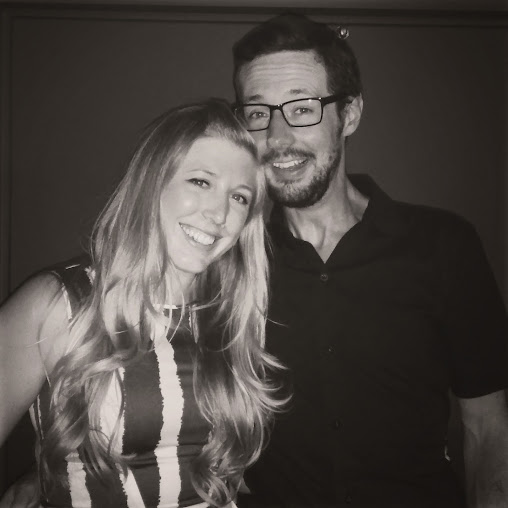 I’ve only been watching a little bit of the World Cup. When it started I talked through my emotions about it with Jon (I’m sure he was really super interested in this), and I basically decided that it’s harder for me to separate the sexist, racist, rapey shit that happens in European soccer/football from the tournament itself. Like, for example, I can happily watch any American college football game. Even most NFL games, without thinking about how many people on the team have been taken to court for something or other. (Except for Pittsburgh. Fuck Pittsburgh and Rothlisberger). But in England, I can’t seem to separate those things. Perhaps because I didn’t grow up here watching the sport, caring about the sport, talking to my dad about the sport….it’s just not the same, and therefore when I think of European football now, I think of a lot of overpaid crybabies who have a tendencies towards sexual assault and, if not obvious racism, are cool with letting racism slide within their sport. It doesn’t seem to help that football is the MAIN sport here. In the USA it seems to be split into seasons-football, then basketball, then baseball. Here, football is pretty much it. Hardly anyone cares about rugby or cricket, not in the same way. So I can’t seem to get past it all-so much so that my fingers are crossed that any future children of mine who are raised in England somehow miraculously decide that football is totally boring and skip that culture altogether. By the time they are teenagers anyway, children playing soccer is pretty much the cutest thing ever.

Anyway, I’m trying to support the USA when they play. Woo!

There have been some gorgeous summery sunsets around here. There is no doubt that I am working hard to enjoy the first summer season in this flat-our balcony gets the best sun in the early morning and the late evening, and it almost almost almost makes up for not having a garden. 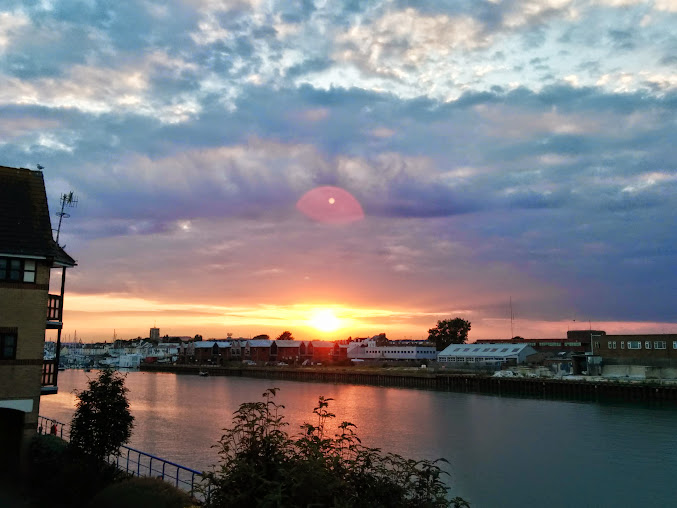 Jon and I are trying to have better evenings together. You know-ones that don’t involve ignoring each other while we stare at our laptops and listen to music. A couple of Fridays ago we went to a local Italian restaurant for dinner, then stopped at our local farm shop which has started to do wine and snacks in the evenings. The Italian place was fun-very legit Italian lineage, as we discovered when we walked in at 7 to find it full of Italians watching the World Cup game, shouting at each other in Italian as their team lost. At the farm shop we had a little table outside, next to the gorgeous church that I am obsessed with (as I’ve mentioned),and the wine was very very good. And my hair looked great that day. It was a good night together. 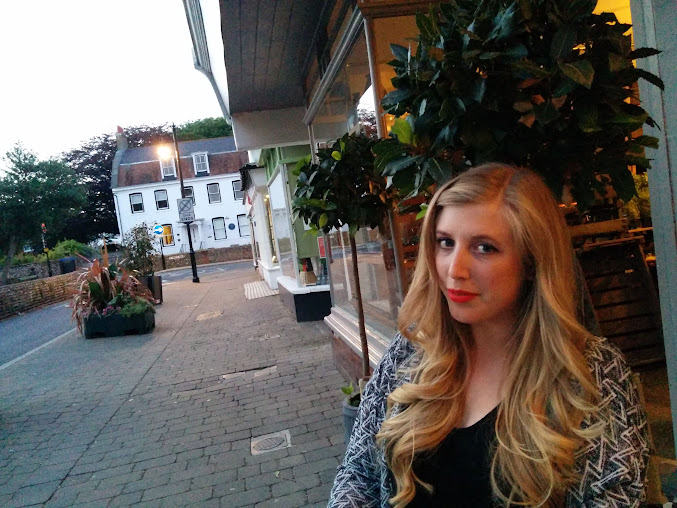 So there’s the past month or so, in a few bits and pieces. This weekend we’ll be having a 4th of July BBQ, assuming the weather holds up. And at the very list eating at a local American diner to bring in the holiday. It shall be good.

4 thoughts on “summer has been happening to me”