It’s pretty easy to feel ultra patriotic when celebrating a holiday outside of the country itself. Something about that buffer zone of space allows me to unironically wear an american flag on my chest and make a playlist that includes Toby Keith and that version of God Bless America sung by Lee Greenwood that they always play at the fireworks shows (to be clear, the playlist also had Sufjan Stevens and the Boss, I’m not some kind of monster). All while eating USA shaped cookies and drinking drinks. Freedom!

We had a pretty action packed weekend, and made our annual trek to an American diner with Colin and Jess on Friday night. This year we tried out a new diner though, and they had tiny decorative thingies in the drinks, plus Jones Soda, so they win the diner competition, in my opinion.

We ate dirty burgers and onion rings and reveled in Americana. It was nice.

Afterwards, Jon and I joined a bunch of other friends for an outdoor screening of Labyrinth at Preston Manor. The weather had been amazing all day, so of course the sprinkling of rain started as the movie started, and finished right as the movie ended. In true English style though, everyone just whipped out umbrellas and raincoats and got on with watching David Bowie in a large codpiece. Dance, magic, dance!

Saturday we had big plans for a bbq on the beach, and it was going to be awesome. But this is England and the sun never really came out….so instead people came to our house and we had a good time there too. Lemons to lemonade and all that jazz! I made a cherry pie and deviled eggs (I ate probably what added up to 6 whole eggs, I’m a little embarrassed), Jess brought the aforementioned patriotic cookies and cupcakes too, and we ate and ate and drank and ate. Dave and Penny came down from Nottingham, Ariel came from London, Bruce wore a bandanna, and it was pretty fabulous. 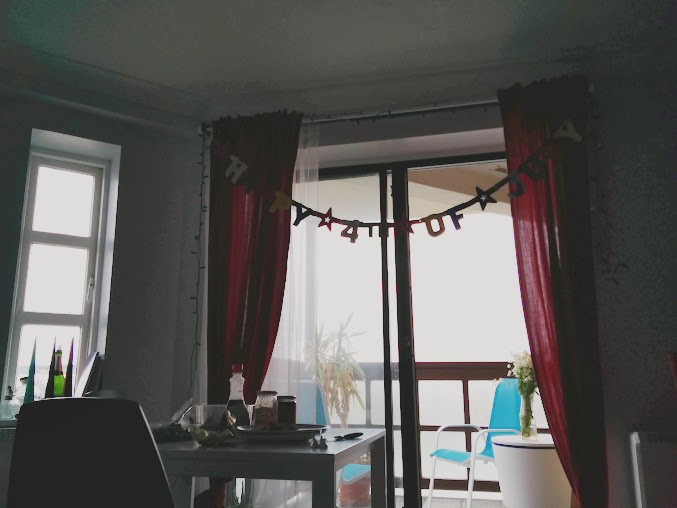 Eventually we ended up at a pub and finished the night that way. So traditional! Sunday was spent cleaning up literally every dish that we own since those are the kind of parties we have, and then Penny and Dave were back to Nottingham, and the celebrations were officially over. In my mind, the 4th of July was always the middle of summer (I know it isn’t, technically), but this year I don’t feel that way, and I’m glad. Maybe because we’re going away at the end of the month…but I’m happy to be able to host some fun parties every now and then, even if I can’t count on the hot hot humidity of an Ohio July to back me up. And if the summer wants to just keep on going like this, that’s fine too.

4 thoughts on “Our 4th of July Weekend”