Now that that’s out of the way, you’ll know just where I’m talking about! And no pressure-I don’t think the majority of people outside of the region hear “Oman” and know just where it is. I certainly didn’t.

It’s hard to know where to start really – before we left, when people at work asked what Oman was like in comparison to the rest of the Middle East, my go to response was that it was “still conservative, but less oppressive”. Now, having seen it for just over a week, and asking our friends a million and one questions on the history and economics of the country, I feel like I have a very vague idea of what it’s like, but obviously it’s impossible to know much about a country just by visiting it for a short period of time. But really – not many people go to Oman, and maybe people out there on the internet want to read about my observations, you know? 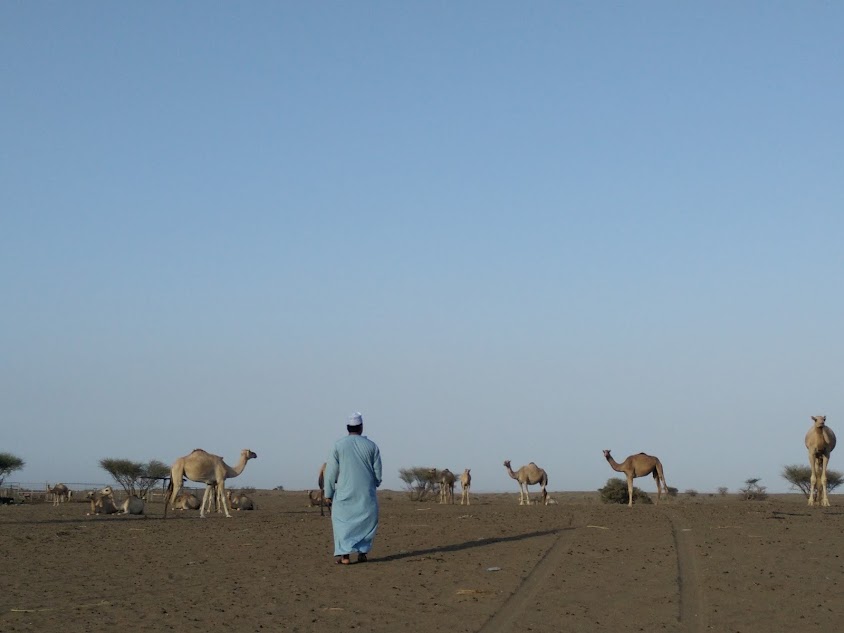 Here’s the nitty gritty: Oman has historically been a trading port for the Persian Gulf, it’s an absolute monarchy – the sultan has been sultan since 1970 (during which time he has worked to modernize the country), gas/petrol was something crazy like 17 pence per litre during our visit – (lots of oil there), the country was temporarily colonized by Portugal back in the 15th-16th centuries, and Sultan Qaboos is the longest serving ruler in the Middle East but people don’t know what will happen when he passes away. 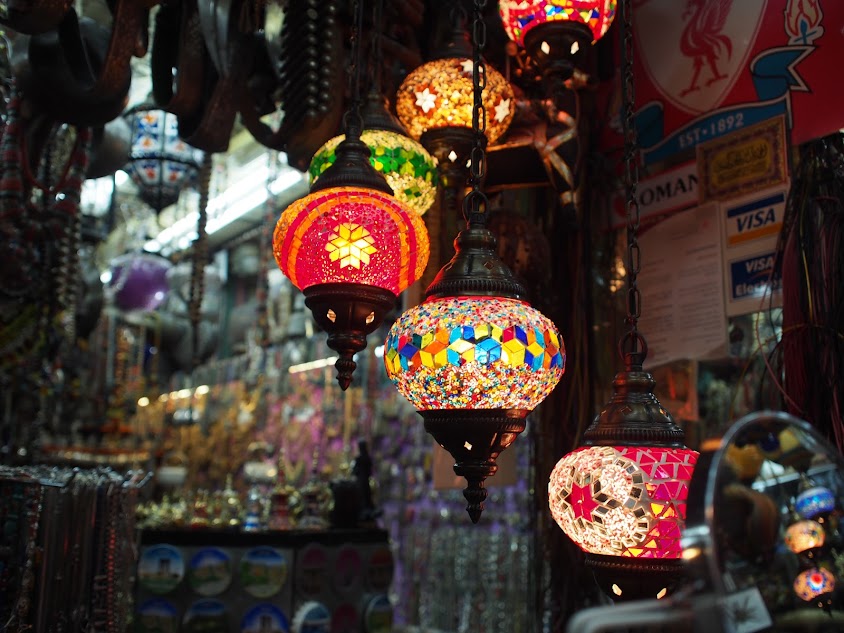 Some friends of ours have been living in Oman for the past three years, so it was about time that Jon and I made our way to the Middle East to check out the scene. It was much much hotter than our time in Istanbul had been, averaging out at 104F/40C every day. Luckily literally everywhere had air conditioning. And I mean everywhere. Think of when you’re sitting outside of a bar or pub in the winter and you cozy up to those heat lamps, then imagine that instead of a heat lamp it’s a massive air conditioner pumping cold air outdoors. Wildly, wildly inefficient and yet, totally normal in Oman. 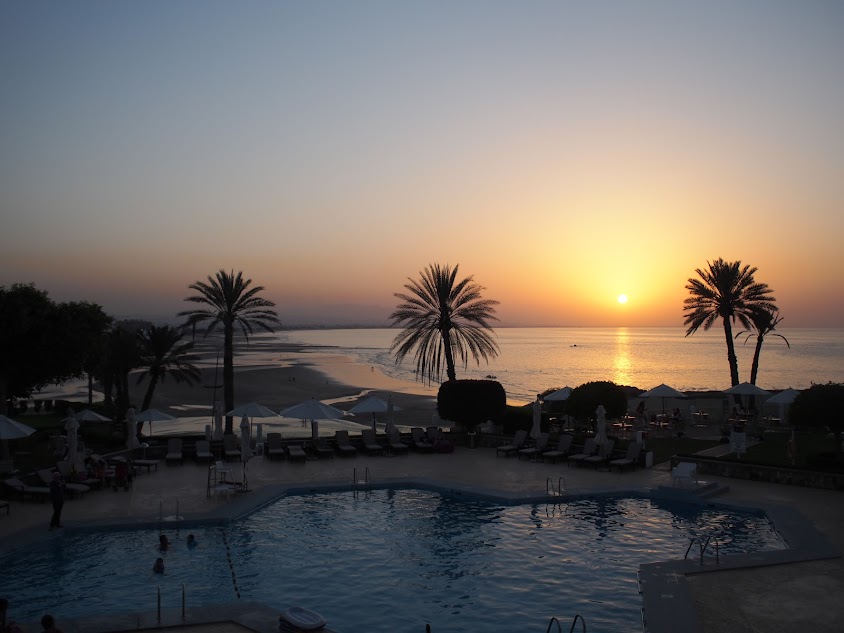 We ran into that again and again-or at least, I did. Trying to be okay with, or at least not dwell on, things that would upset me in my normal day to day life. For example, all the driving, even just half a mile down the road! Heat-related, obviously, but it is a hugely car-driven culture, excluding the low paid workers who don’t have cars. There’s no recycling in all of Oman, but no one drinks water from taps, so we went through at least a dozen litres of bottled water while there, all of which were just hoofed into the trash, and every time I drank water I felt guilty. While driving out to the desert for a night of camping, we drove by a work camp where many Indian workers live, their metal rectangular shacks placed end to end like dozens of tin cans in the sun. 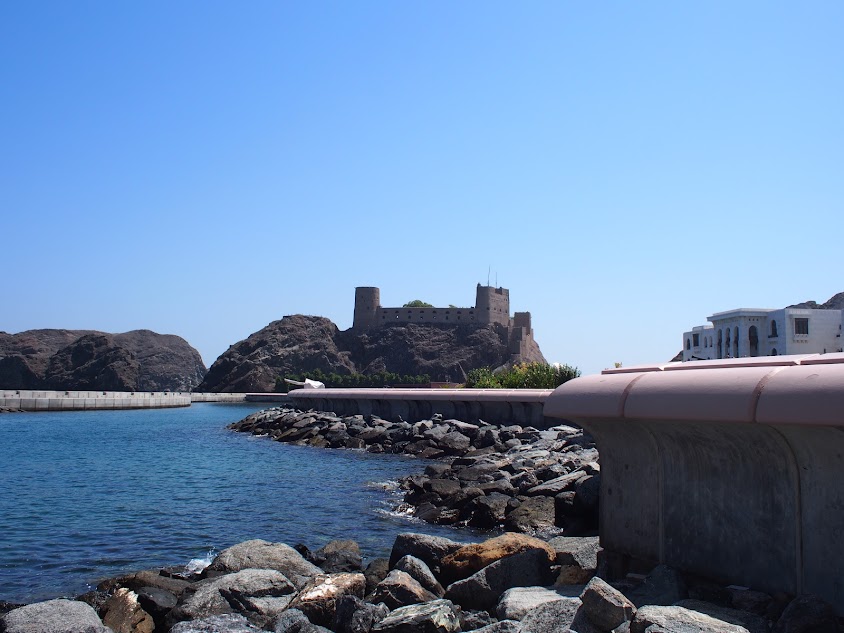 We saw men, mostly Omani and Indian, everywhere, but very few women and even fewer children, leading to a strange feeling of something being slightly off – something that you can’t put your finger on until it’s pointed out, and then you realize “ah! that’s what it was all along”. And here’s a fun one – it’s illegal to have a dirty car. Oh, and lots of foreign tv is shown in Oman, but anything deemed offensive is edited out, which can be a bit trippy when you know what really happened in that episode or that film, or it’s a big plot point, but it’s not showing! In a similar vein, nothing about homosexuality can be referenced on tv either, including the word “gay”. Leaves some holes, really. Our friends mentioned that live music was banned recently, but some places have started surreptitiously using bands again. The weekend was changed a few years ago – just moved to Friday/Saturday rather than Saturday/Sunday. It’s illegal to make rude hand gestures (which is difficult to remember with all the crazy driving). And the law recently changed to say that female expats couldn’t get work visas, putting a lot of women in a tough spot. Lots of things like that.

Oh! And incredibly important for the reasons of this here internet space- it’s illegal to take pictures of Omanis, according to our friend, so I was very hesitant to pull out my DSLR or even my phone in public spaces. You’ll notice! Apologies. 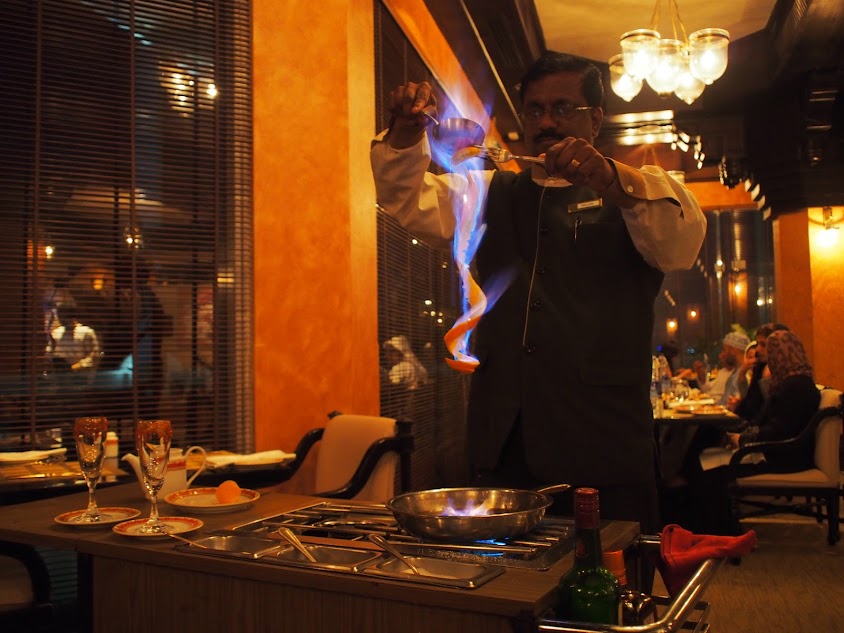 It is a place of multitudes, and of varied experiences, and there’s just not much to be done about the negatives, particularly when you’re just a dumb tourist in town for ten days. All there is to do is soak it up and try to understand a completely alien part of the world while not getting so bogged down in social justice brain that you can’t see how other people live and just observe. 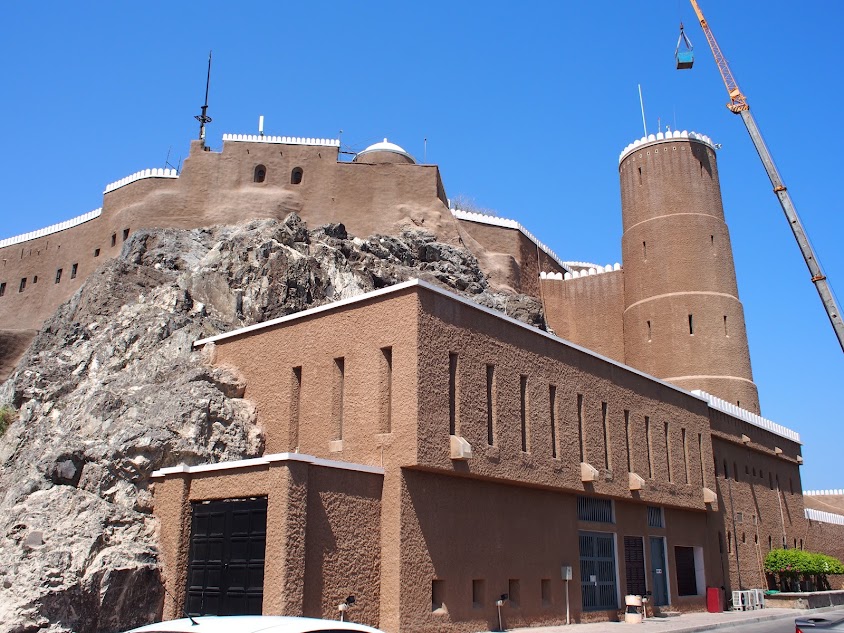 We tried to do a mix of all the things. Oman is tricky in that Omanis can’t legally buy alcohol, but expats can if they get a license to buy it. Our friends were able to stock up for our visit, and Jon and I were able to each by two bottles at duty free on the way into the country, but for the most part, you have to find places with liquor licenses like the nicer hotels, some bars, and some of the older restaurants. And our friends know all of them! We essentially did a tour of all the big hotels in Oman on different nights, since what sort of holiday has no wine, no cocktails, no nothing? Our one pool day was spent at one such hotel, drinking pina coladas and reading and being overzealous with our sunscreen. Only a few other people were there, even though the pool and hotel were huge. Magic.

But Jon and I were also happy to be chauffeured around and shown a bit of Oman’s culture. The Grand Mosque was truly magnificent. Once again I donned a headscarf and we padded barefoot along the cool marble floors, marvelling at the architecture and artistry. I now understand the use of marble everywhere, it keeps everything so cool to the touch and is a real respite from the harsh heat. Funnily enough, as A and I ripped off our scarves as we walked out of the mosque, an Omani man in the traditional dishdasha said to me “you’re hot, yes? You know, in Oman it is only winter!” And then we laughed together as he walked away. But seriously….I was sweaty and it was not a good look. 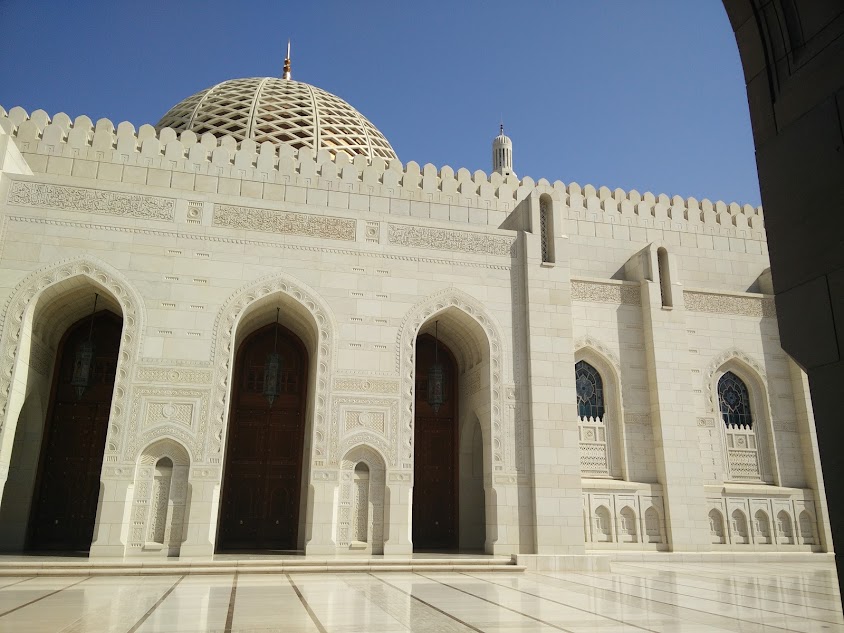 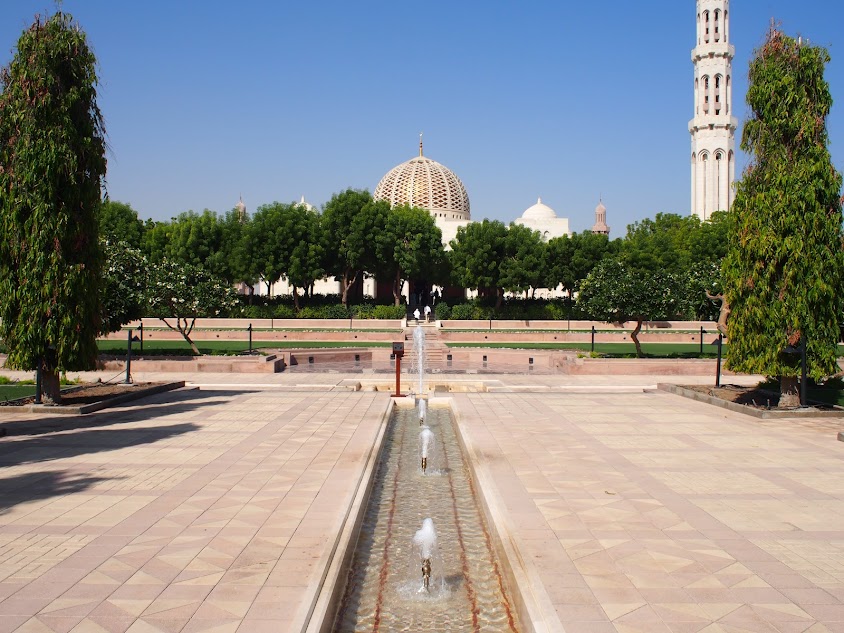 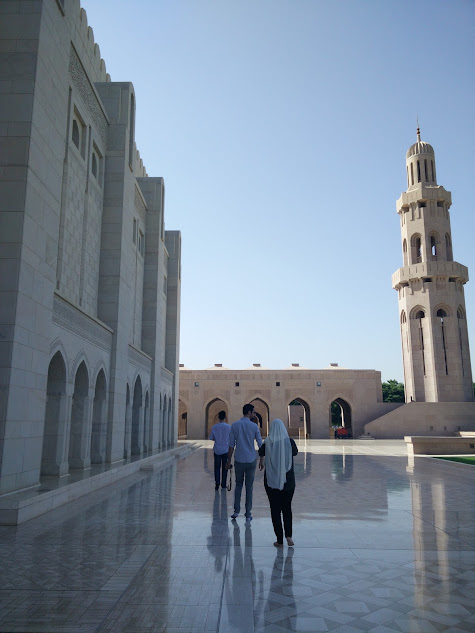 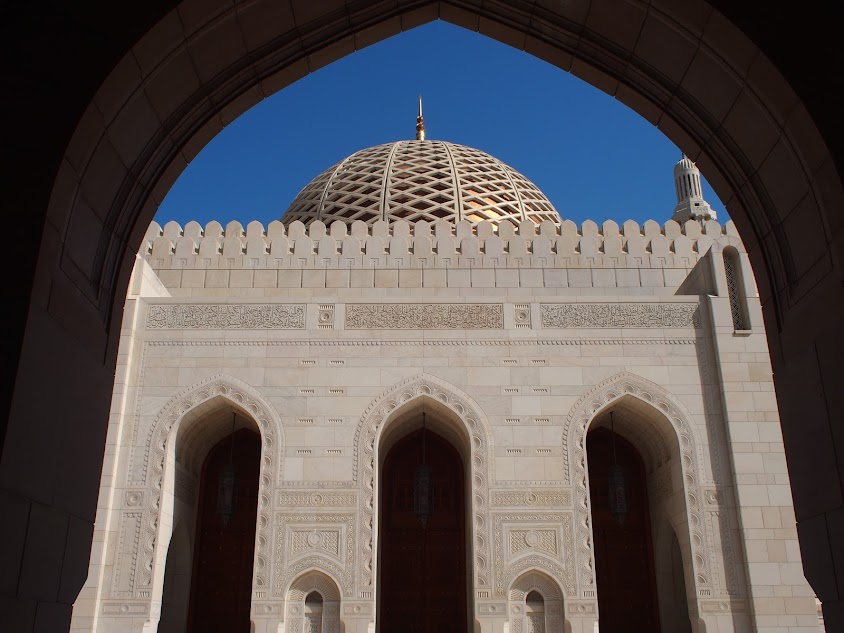 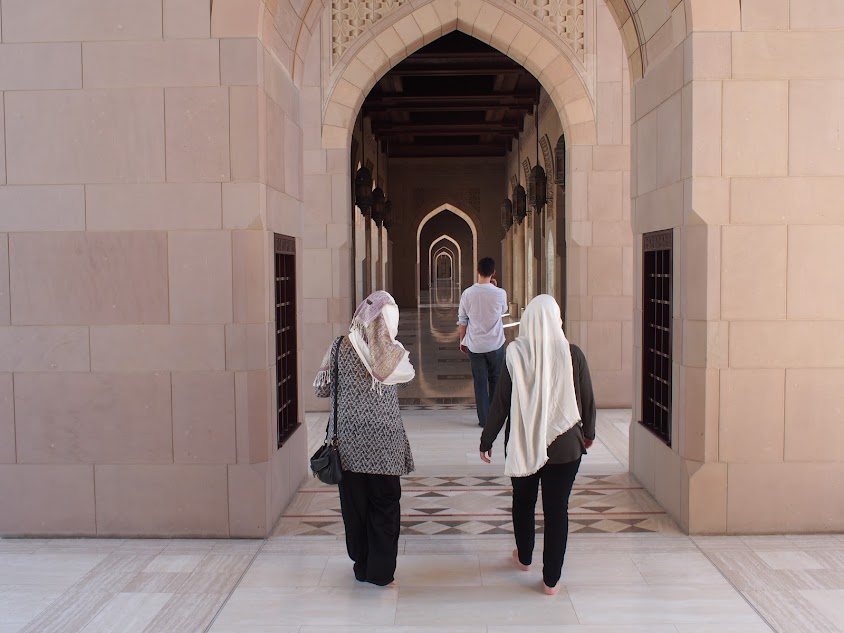 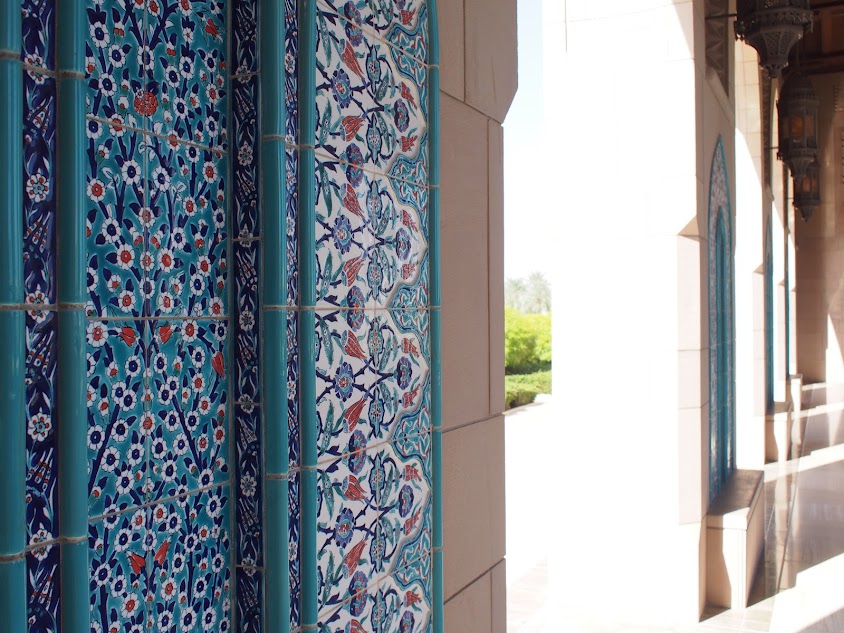 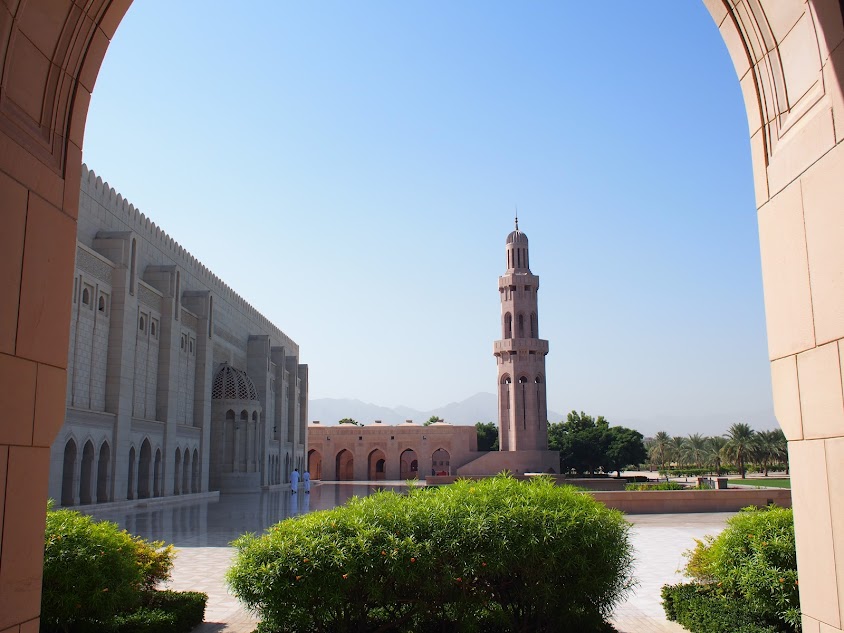 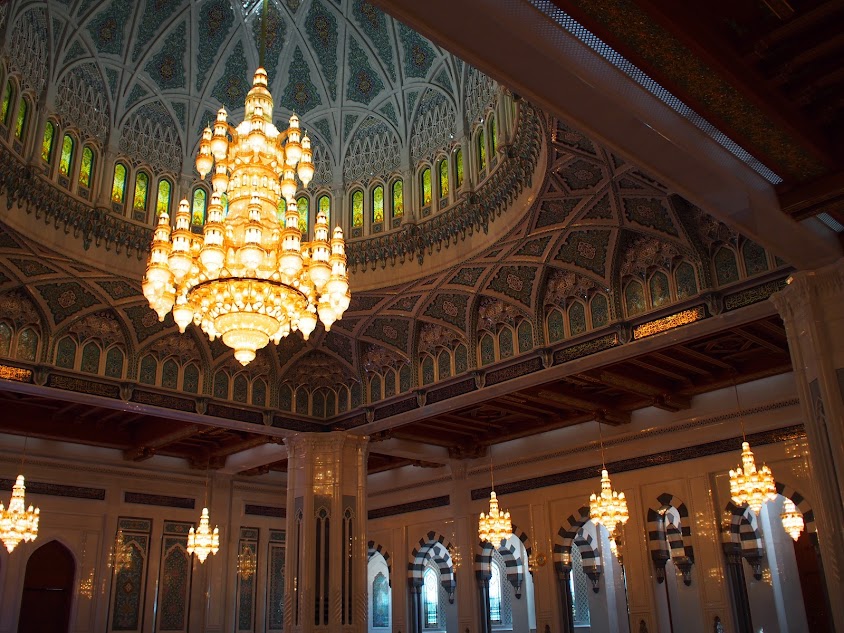 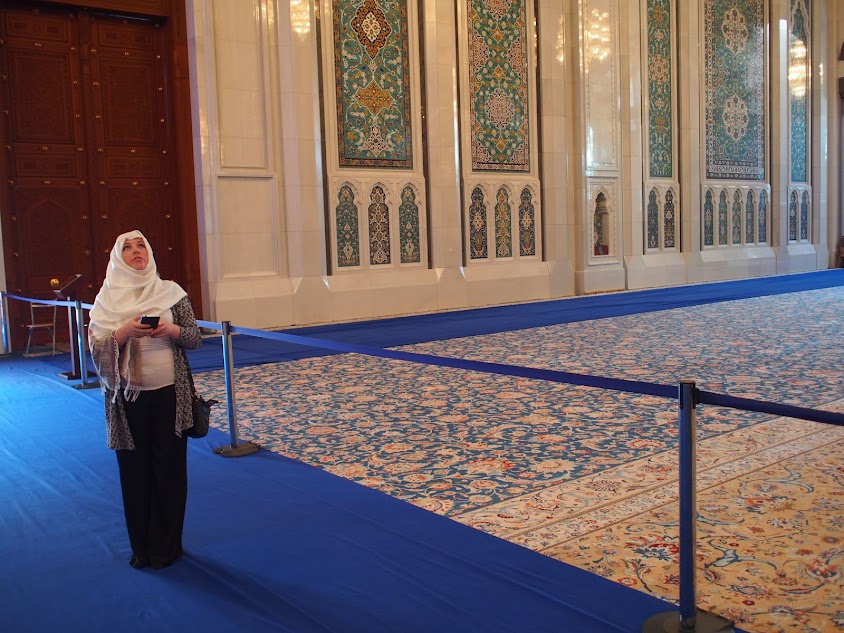 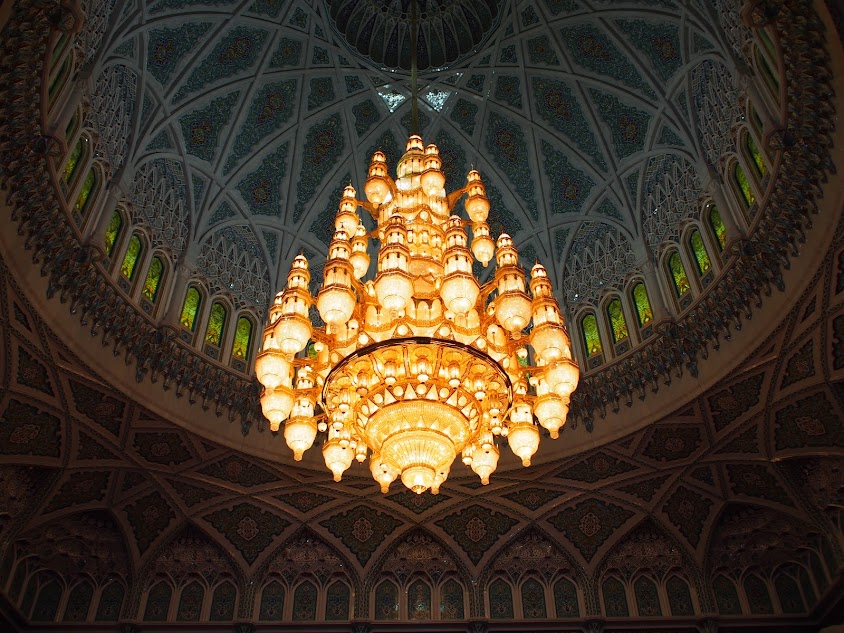 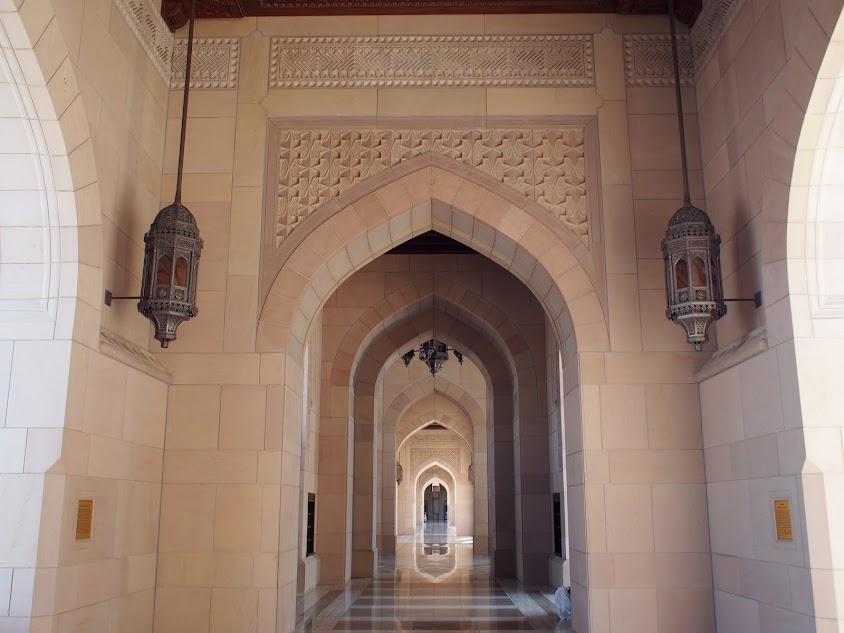 We dined on traditional Omani fare -it’s very meaty, very bready – and smoked shisha under twinkling lights. We spent our last evening wandering through the crowded, twisted alleys of the Souq, and bought trinkets of Omani silver, kajal, and saffron after Jon did some solid haggling for what I’d picked out (I’m not really into haggling unless someone is obviously trying to rip me off. Otherwise it’s just “oh okay, yeah, I’ll pay that”). We watched the sun sinking down into the Gulf. We drove out into the desert and I met an actual herd of camels, completely unplanned (but I’ll tell you more about that another time). We went on a boat tour and saw dozens of playful dolphins out at sea, and then went snorkelling in a little cove, where I got a sunburn and the water felt like we were stewing in a slightly hot bath. We sang Bob Marley at the top of our lungs in a taxi cab with the kindest taxi driver of all time. We caught up with our friends, whom we haven’t seen for longer than a cramped visit a few times a year. It was all really really good. 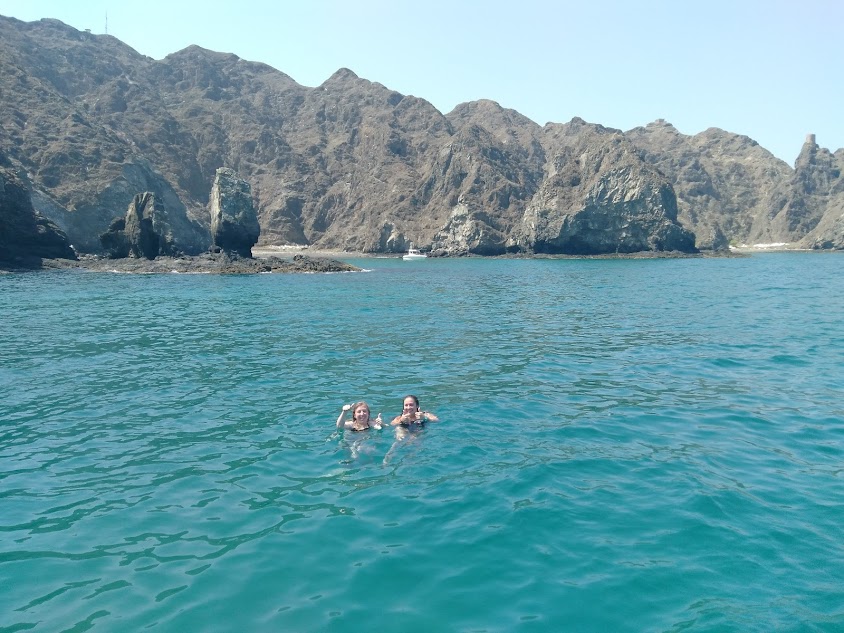 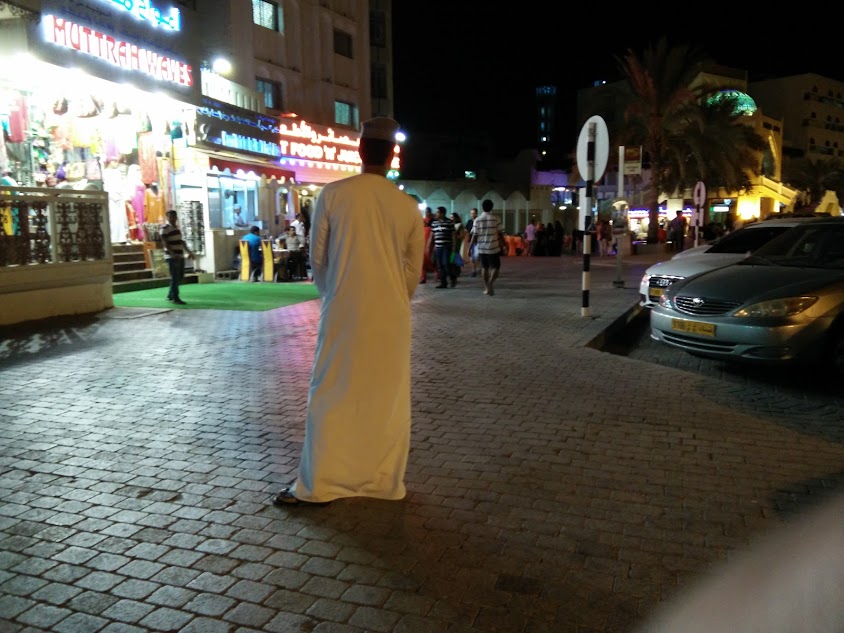 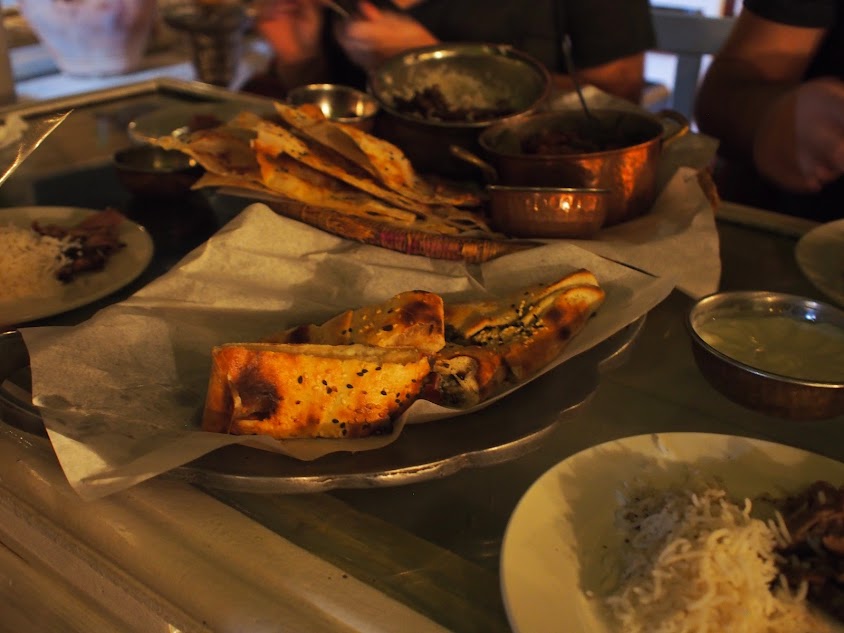 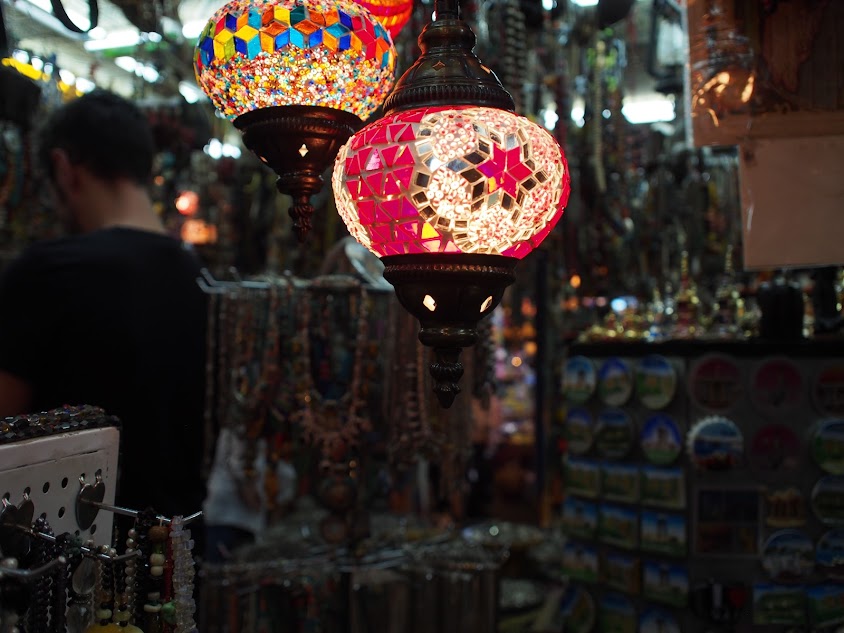 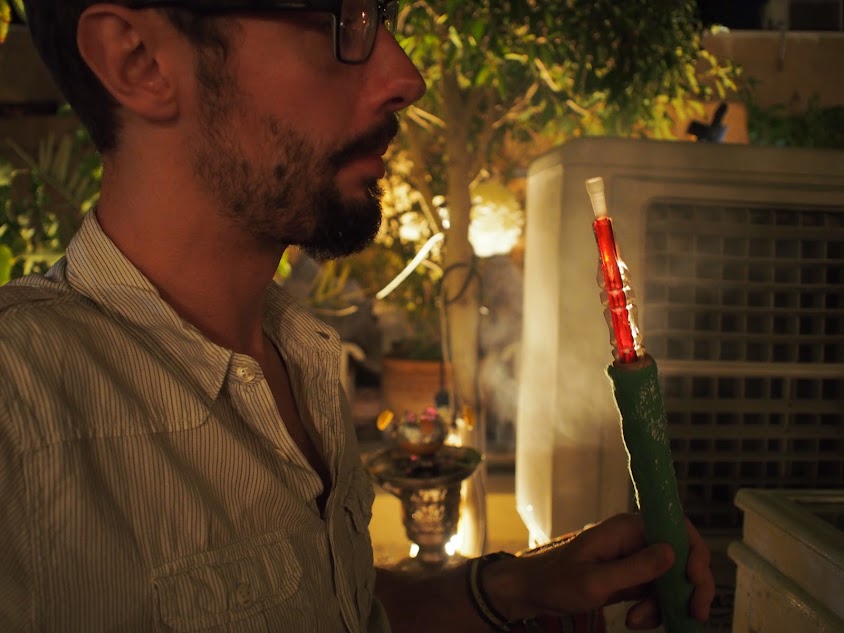 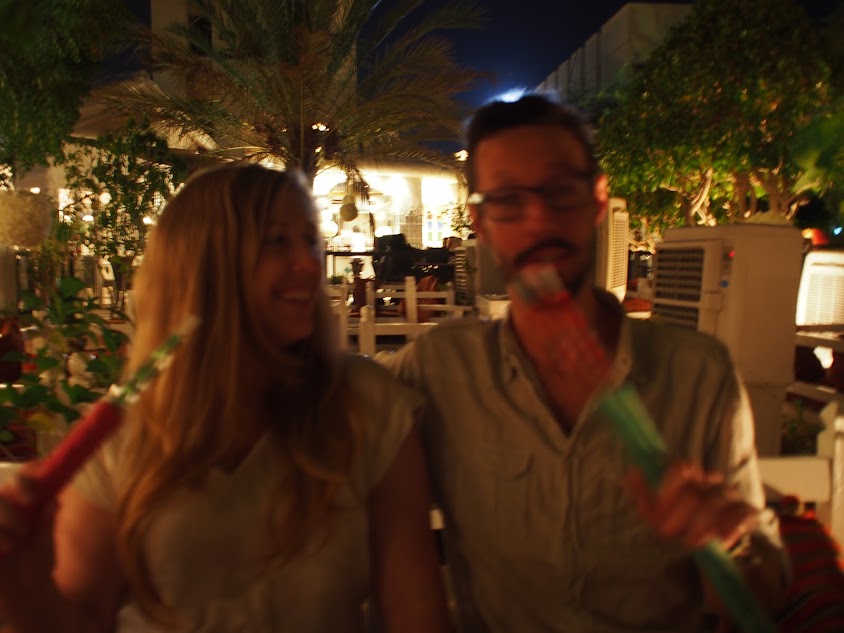 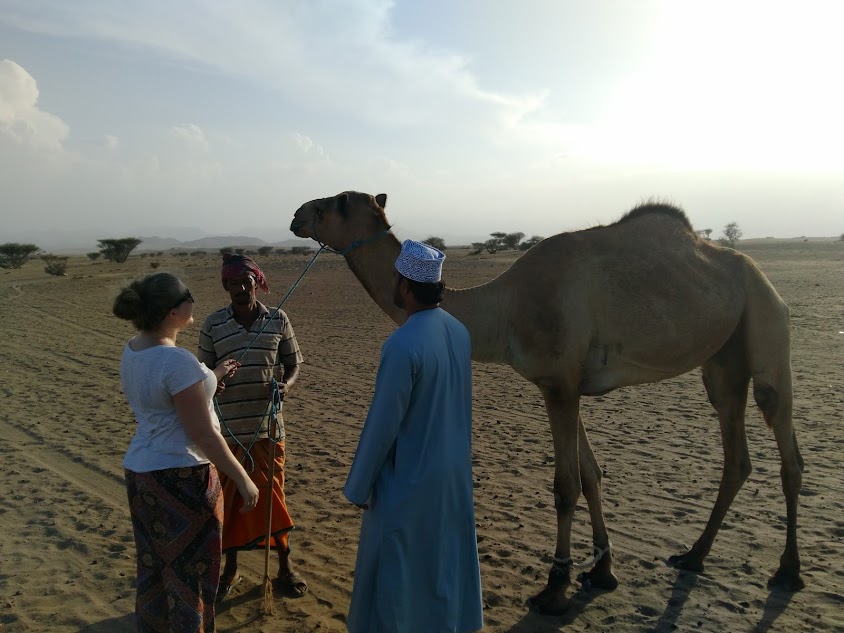 It was really good getting to see our friends (mostly not pictured here, because they never asked to be put on the internet), and the life they’ve made out there. We miss them so much, but they are happy! It seems like a good place to be for expats, or natives, or people with good jobs (maybe not so much for the imported migrant workers, although that can be said in many countries I think…) and had they not gone out there, I doubt we ever would have gone to see that part of the world.

It will also be interesting to see what happens to Oman in the near future. In a country of about 4 million, with nearly half of that constituted of expatriates, and with a very young native population-something like 43% are under the age of 15 – not to mention an ageing Sultan, anything could happen in the next few decades. 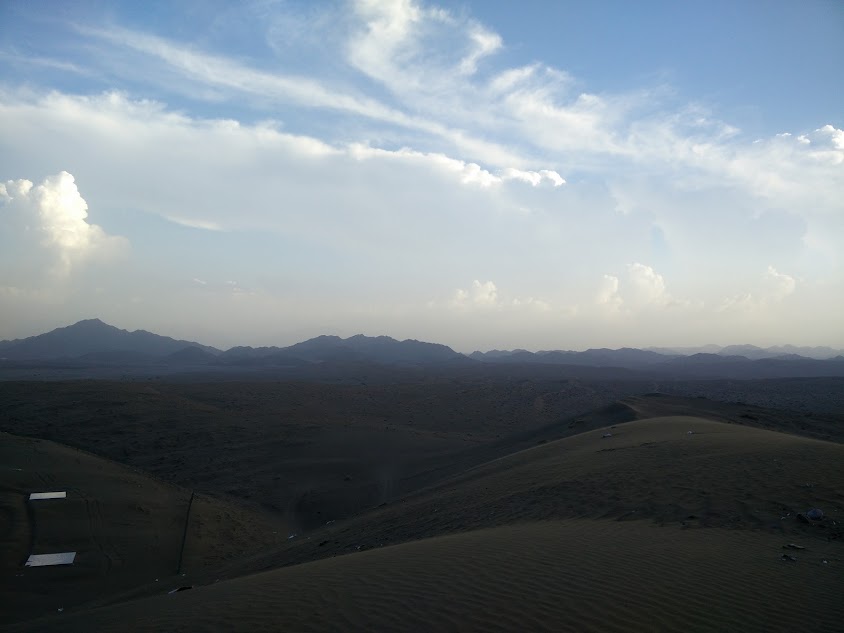 I’ll talk more about our time out in the desert in another post- camels, tents, dune bashing and quad bikes…it’s definitely deserving of its own post. To be continued. Thanks for having us Oman.